Guido van Genechten was born in 1957 in Mol (Belgium). He studied drawing and painting, graphics and photography at the Academy of Fine Arts in Mol. For many years he worked in the graphic industry. Now he works as a fulltime illustrator of children’s books.

In 1998 he won the international Illustrator’s Award City of Hasselt with his picture book ‘Rikki’. This prize was the beginning of his international career as a children’s book illustrator.

Since that moment he has created many best-selling books and received several awards. In 2007 he was the winner of the Reader’s Digest Award for Best Children’s Book Illustrator and his book ‘Little Kangaroo’ was declared ‘Best Picture Book of the Year 2007’!

In 2008 Clavis celebrates the Guido van Genechten year, as it has been 10 years since his first Rikki title was published. In Belgium and the Netherlands as well as abroad, there will be a lot of new projects to celebrate this special event.

A jury of librarians specialized in children’s books has chosen ‘The Wobbyy Bottoms Boogie’ by Guido van Genechten as picture book of the year 2010 in the Nederlands.

This book was the headliner of the national campaign: ‘The National Reading Days’ (celebrated from the 20th to the 30th of January 2010), largely commented by national TV and radio. This campaign focuses on the importance of reading to children. It stimulates their imagination and their language development, and children just like to be read to.

Other books of Guido van Genechten 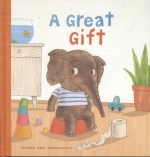